Cypher Card is a smart credit card that remind you of your budget using its accessible and straight-forward ink screen display. It is an easy way to be aware of how much you spend so you can make a wiser decision before swiping the card.

Money management has been a "modern life problem". People are not saving their money as wise as they are spending it. There are many banking apps that aim to help better money management, but they are either too redundant or unintuitive to access. I found this opportunity to access budget management on the credit card, the item that we hold when making purchases. Cypher will become a more intuitive way for users to be more conscious of their spending habits and what they buy.

This is a 1 month individual project. In this time frame, I spent the first half brainstorming for problem and possible solutions, and the second half executing the design features.

This video explains how the product is introduced to users as well as the firs-time on-boarding experience. The physical card design from the video is remained from the early version but the overall experience is the same. Main UI will be shown later this page.

It's too easy to start saving

Cypher Card is shipped to you in a slim envelope like your other credit cards. Inside the package, there is a start guide and the card itself. Follow the instruction on the start guide to begin setting your budget with the app.

Without digging into the phone to know if you are overspending when you at the cafe line, the Cypher Card shows budget progression bars on the card body. The ink screen changes status as the transaction happens. It won't show the exact number for the sake of privacy, but it tells enough for you. Pay like you used to, but now you know if you are a conscious spender or not.

Cypher wants you to own your own money. If the card can't say enough, always feel free to check the app for detailed information of your budget settings and progress of specific categories. The Cypher app also allows you to add cards, set particular budget goals, as well as to provide you some saving tips.

Money should be spent more responsibly

In this short individual project, I picked this topic since I was related to the problem of not making enough money but spending quite much. By exploring some "How Might We" questions, I explored some potential directions for this problem. These include highlights like "How might we make spending more conscious by acknowledging users in a clearer way so they don't overpay" and "How might we make payment easier by combining benefits of both analog and digital transaction so users can enjoy spending in a smarter way?" 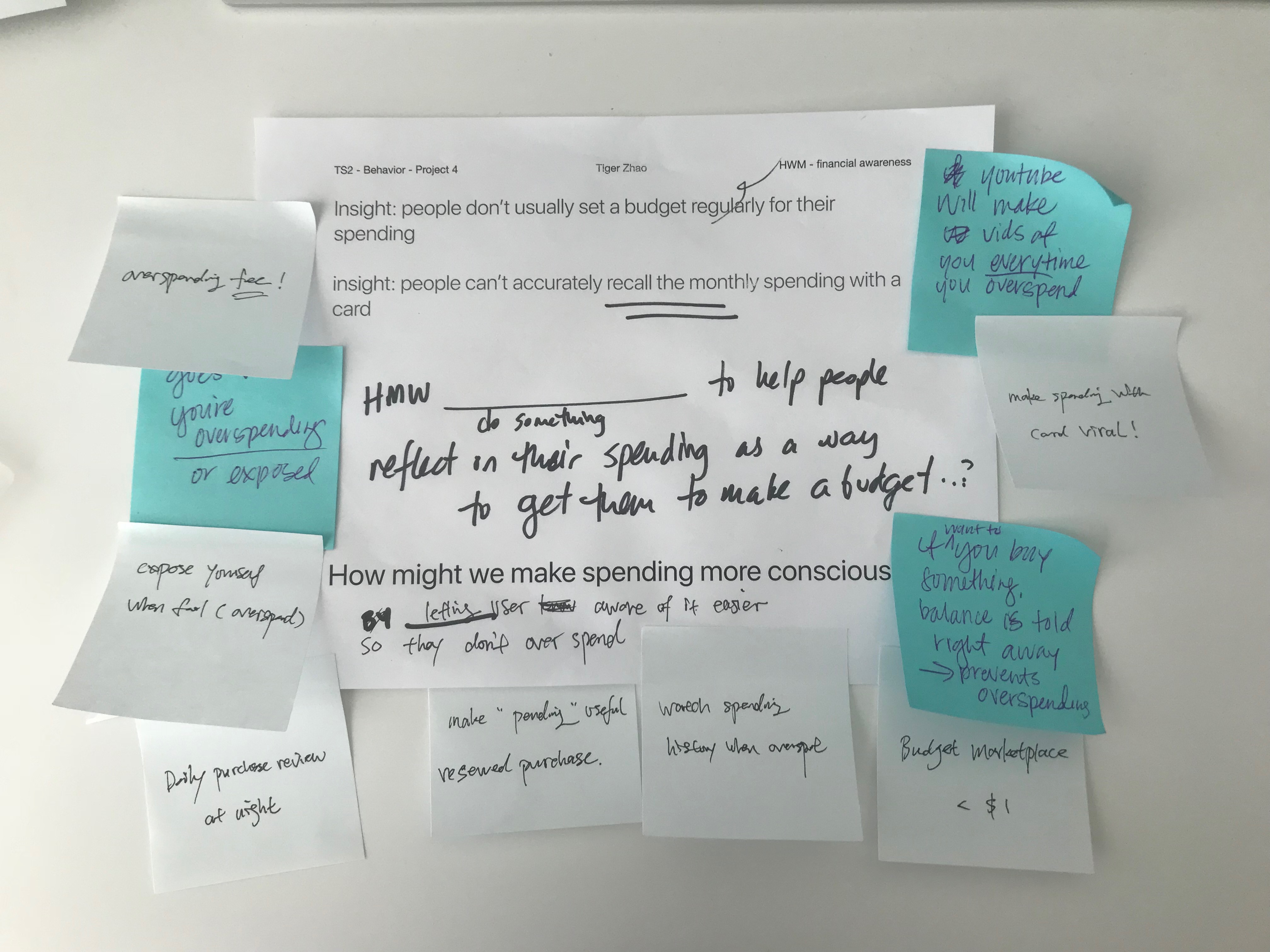 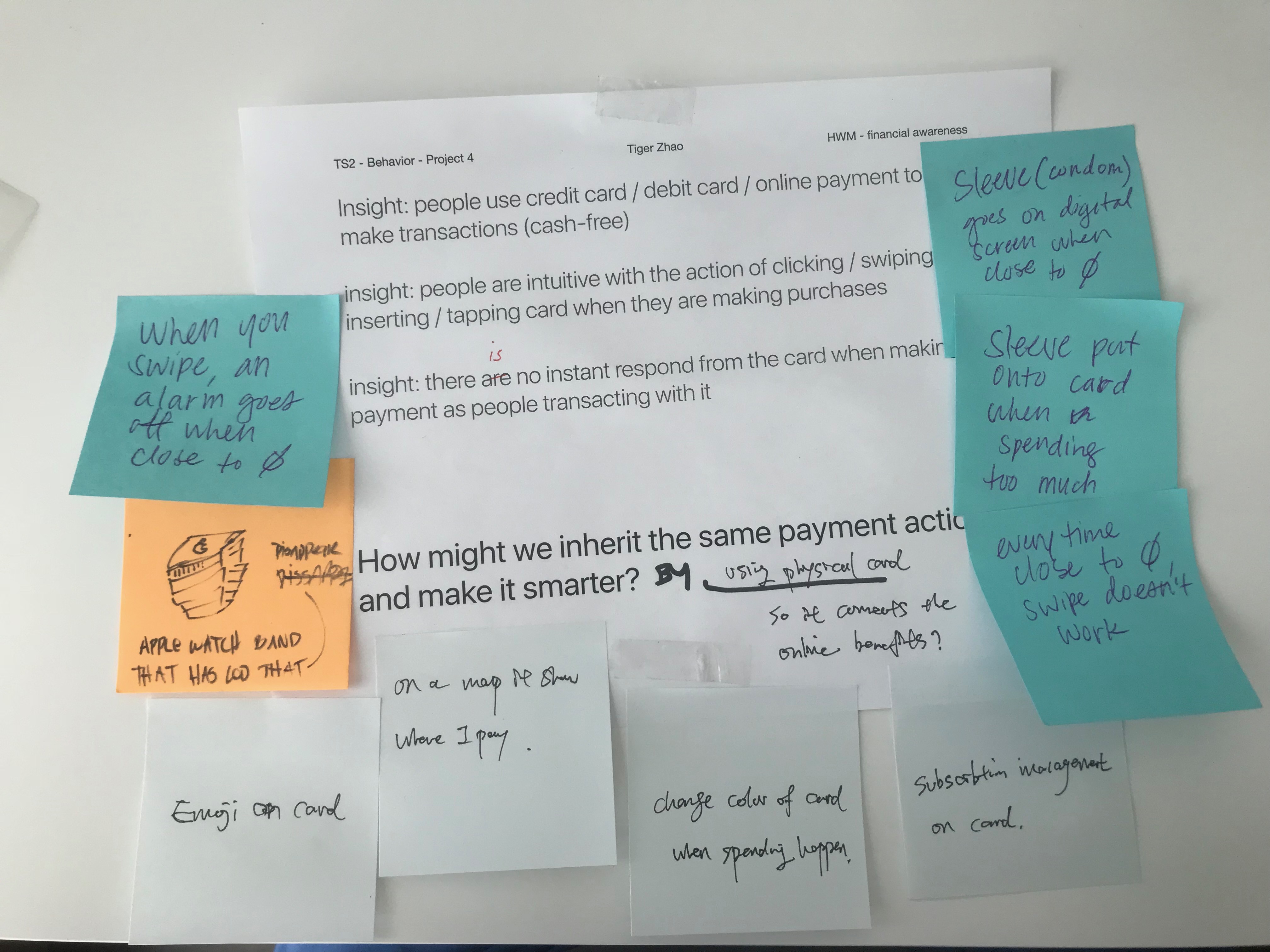 Who are we designing for?

Everybody spends, but Cypher's target users are the ones who have daily habits of making unconscious purchases. Jane, who is young and just started her career, is making those unconscious purchases on little things like coffee, snacks and stuffs from social media ads. She wants and needs to pay more attention to those things, so Cypher works for her just right. 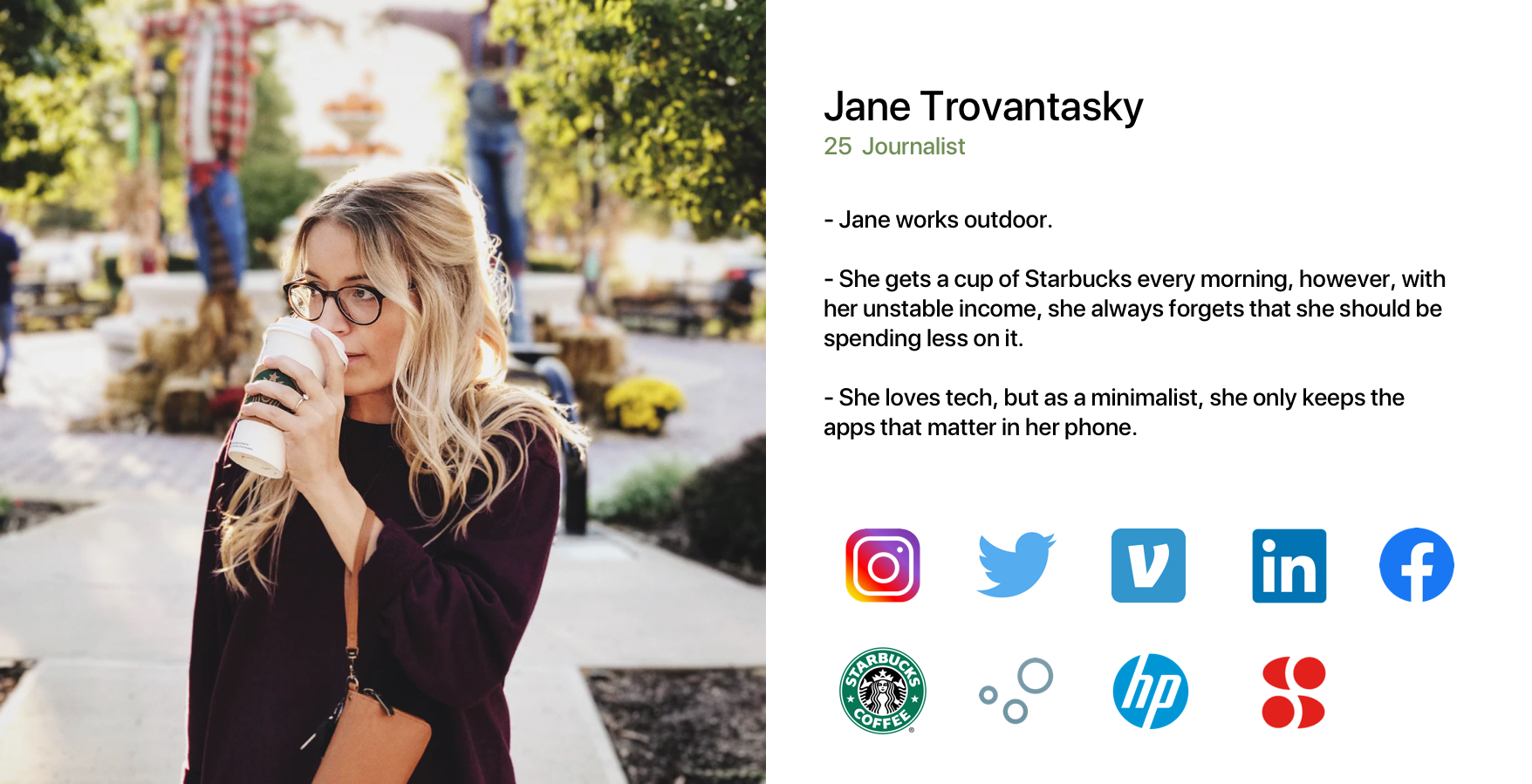 The one picked out of many

After confirming on the topics and the directions, there were 30 ideas of solutions generated. These solutions cover different angles of perspective in order to seek for the ultimate answer of the given problem - be more spending conscious.

Since the physical card is one of the most significant affordances in the product, the Cypher Card has undergone many rounds of appearance design. The challenge is to design the card to be minimal and functional. The ink screen helps to display different contents when a transaction happens while not costing any extra power when not being used.

Who doesn't want to hold a good-looking card?

First pick of the design allows the ink screen to take over half of the right portion of the card itself to display. The left side will be laser engraved with cardholder's name and the Cypher logo, while the center holds the card reading chip. This design is informative but a bit visually busy.

After testings and renovations, the second version of the physical Cypher Card came out. It is more modern and neat in the same physical profile. The ink screen goes to the bottom of the card so users won't pinch on the screen when holding it vertically. The ink screen also shows which card is currently paying and can be switched through touching the screen. There's a progression bar for most-spent category so before purchasing more fast foods, peek on the card first.

... that comes in a good-looking packaging?

Unlike your other tech products, Cypher Card will be shipped to you in your mailbox. What's including are the start guide and the card itself. The packaging is designed to express a sense of cyber tech feeling and the graphics used reflects the relation between finance and computers. On the back of the start guide there is a QR code, in case you don't know where to find the app. 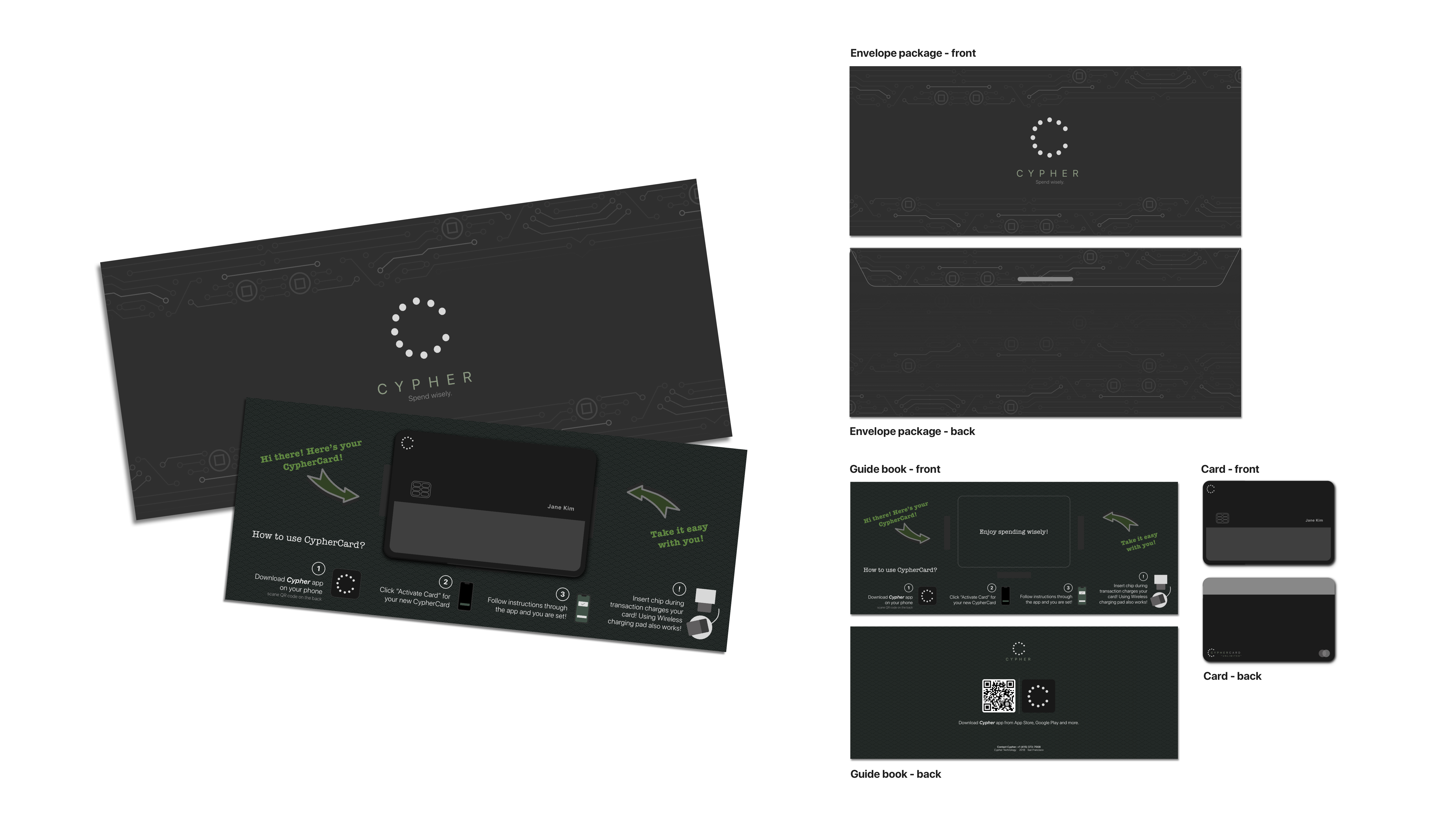 Spend like you used to, save much more than ever

To illustrate how Cypher Card helps, this story board tells a story of how Jane benefits from the product when buying coffee everyday. It's the simple on-boarding and use experience that makes Jane feel happy when using the card.

In the early part of this project, the investigation was mainly on the "Out of the Box" experience. In terms of illustrating that experience, this following task flow explains how users would use the app to navigate in the early process of the product, including applying for a card and set up budgets.

The app, thought should not be the one that users interact when making a purchase, is still a helpful tool when more information are craved. There are three sections for the app: Cards, where card budgets are shown; subscriptions, where users can find what subscriptions associated with the cards; account, for the other settings, of course.

The following screens show the process of removing and adding new subscriptions into the app. This feature is newly considered to be one of the most competitive features among other banking apps since it tracks and add subscriptions automatically, and it gives users the ability to stay alerted and not miss the fact that these charge are undergoing quietly.